When I Learned to Trust My Instincts...


I first began to suspect something was different about Thea when I started to take her to daycare.  She just seemed less active, less aware, and more babyish than the other toddlers.  She wasn’t walking at 18 months.  I heard so many reassuring stories about kids walking late and it turning out fine but something still didn’t quite feel right.  I remember walking into daycare and one of the moms asking her daughter if she needed to go potty before she left.  I was shocked.  Thea was not even able to communicate with me let alone start potty training.  I asked the teacher about it and she said that the child was just an early learner.  I smiled at the teacher, thanked her, and sat in my car.  As soon as I closed the door, I began sobbing.
Around this time, Thea also began laying down with her ear to the floor.  My husband and I studied her as she lay there.  We thought maybe she had an ear infection but she was so quiet about it.  Shouldn’t she be crying in pain?  Eventually, she would get up and start playing again so we dismissed it but something inside me felt uneasy. 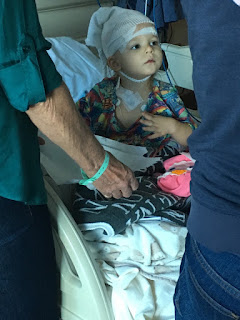 Looking back, I am amazed at how much my instincts seemed to be telling me about my child and our situation.  I felt something was wrong before it presented itself.  I also never felt right about the seizure medicine even though it was the best logical solution at the time.  I remember that panicky feeling and the overwhelming dread the day that she almost died in my arms before the real danger was confirmed.
I feel guilty that I did not act on those gut instincts sometimes.  I wonder if I could have prevented some of the things we went through if I would have trusted myself and been more insistent about more testing.  I was afraid to irritate the doctors.  I was afraid I was wrong.  I was afraid I would cause an inconvenience for everyone.  Now I know that sometimes I’ll have to ask for what I need even if the professionals are telling me with the best intentions that I don’t need it.  My child is counting on me to advocate for her as someone who knows her best.  I’ve learned a powerful lesson on trusting my gut and intuition.  Sometimes with rare diseases the knowledge is so limited that instinct and intuition is all we have.