When Thea Finished Her Puzzle...


The Christmas holidays were a wonderful time for our family.  Tyson had the whole week off plus a few extra days for the New Year.  Time seemed to move more slowly as we played games, ate foods with ridiculous amounts of butter, and stayed in our pajamas until noon.  Thea loved all of the decorations and the lights.  When we drove at night, Thea would exclaim over the lit trees, the reindeer on roofs, the giant wreaths, and the candy canes.  We went for strolls around the block at night enjoying the holiday displays and meeting neighbors for hot chocolate and small talk.
On Christmas Day, we woke up and Thea found a baby doll crib under the Christmas tree from Santa.  Her eyes grew wide and, without even touching the crib, she ran up the stairs to her room.  She dashed to her baby doll and whispered in quiet awe, “Baby!  Santa! There’s a bed for you!”  She returned to the Christmas tree and the cradle and snuggled her baby into the sweet little bed, overjoyed with her gift.  She opened each gift after that with wonder.  She immediately wanted to try it on (if it was clothes) or play with it (if it was a toy).  We had to drag her back to the Christmas tree to open the next present, and then she would delight in the new present, and we would have to start the cycle all over again. 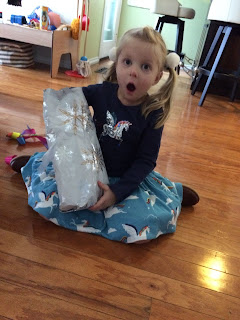 In addition to the new toys to play with, Thea’s teacher had stopped by shortly after Thea’s recent surgery to check on her and to bring her two puzzles to work, one with the alphabet and one with animals.  Thea was thrilled, especially with the alphabet puzzle.  I was previously unaware that she had been obsessively practicing her letter sounds at school.  In fact, we had taken Thea to the optometrist a couple of weeks earlier, and they gave her letters to read to check her sight.  I was shocked, as Thea confidently named most of the letters that the doctor showed her.   I thanked Thea’s teacher the next day and she laughed and said that Thea loved learning her letters and was asking for new “letter work” each day.
Thea was excited to try the puzzles.  They were the kind with 24 pieces that had to be put together to make a picture.   I looked at them doubtfully.  We had moved past the puzzles where you matched the pictures, but 24 pieces seemed a stretch.  Thea begged to open the puzzle, so we did, and I gamely set out the pieces.  I was mostly putting it together, over and over again, describing my thought process, looking for edge pieces and corner pieces, checking the colors of the pieces and showing her how they matched to make each alphabet letter or animal.  She was watching carefully and putting pieces where I showed her that they would go.  Over the next few days, she frequently asked to do the puzzles, so Tyson worked on them with her as well.
Within the week, I was surprised to find that things had changed.  Slowly, Thea was putting the puzzles together and, slowly, she didn’t need our help.  She matched the pieces, one by one, experimenting until she found the right spot.  Tyson and I watched this with widening eyes.  Finally, there were only two pieces left and we watched as she tried the wrong piece in the wrong spot multiple times.  I could feel myself yearning for her to finish the puzzle herself, silently urging her to find the right piece, to prove that this was really happening.  Our daughter, despite her struggles, was making this new leap in front of our eyes.  Tyson must have been thinking along the same lines because he told her to try the other spot, a note of frustration and impatience in his voice.  I looked up at him and before I could complete my look of disapproval, he was apologizing and telling her to keep trying.

I understood what he was feeling.  Watching her do this puzzle sent a feeling of pride, joy and hope, quickly followed by fear and the desperate need for her to do that puzzle perfectly so that we could believe that it was all true and that maybe things could be okay.  Tyson and I held a silent conversation as Thea, untroubled, continued to work her puzzle.  We would lean in to the joy of this moment and not let that fear part take us over and steal the gift in front of us.  We would let Thea work that puzzle as she saw fit.  We did not want to create out of our situation a daughter that felt afraid to make a mistake or even a daughter that learned new things to please her parents rather than taking joy from the learning itself.  We did not want any of us to use her diagnosis as an excuse to give up or to think small and at the same time we would not desperately hold on to her successes to make us feel okay.
I was also beginning to realize that we were in danger of unconsciously underestimated her.  My surprise at her ability to pick up on letters and do a puzzle was evidence of this.  We knew that TANGO2 came with developmental delays and we were so focused on accepting this fact that we were in danger missing the things that she could do or might try if only given the opportunity.  There was a balance between allowing her to be where she was and expecting her to learn new things at her own pace.  We would have to navigate this balance in becoming parents to Thea.  Maybe it was time to let go of some of our expectations and be open to what each day could bring.  For now, we were leaning into the joy of this latest milestone and looking forward to reading the much requested B is for Bear alphabet book each night.
mitochondria disease mom blog rare disease tango2 disease