My notes from the Tango2 conference


Last week, my husband and I attended the first ever Tango2 conference in Houston.  It was the most amazing, memorable experience!  I will share more about attending the conference in my next post.  In this post, I'm including all of the notes that I took.  This is what I understood when I went to the conference.  It is all from my perspective (and my husband added a few details) so I could have misunderstood or missed something.  The power points from the conference will be shared soon and they will have more details and be directly from the doctors.  This isn't intended as medical advice.  I'm just a parent.  I'm posting because it helped me to write it all out and I hope it will help you too!

1.      Many of the Tango2 kids have seizures and issues with their thyroid.  Parents should have the thyroid checked regularly.  If your child does not have seizures, watch carefully for signs of them.  Not all seizures involve shaking, some of them can be a blank stare.  A few parents participating in the study reported that loud noises triggered seizures in their child.  The research so far showed that 41% of T2 kids have seizures.  95% have balance problems, muscle weakness, and difficulty with speech.  76% have a lazy or wandering eye.
2.     Relaxing medications like Benadryl seemed to make Tango2 patients worse.
3.     When the children are in crisis, it is important that they are fed in some way.  If they were in crisis and only were on sugars, in some cases another crisis followed right after the first one.  (This happened to our daughter.)
4.     Crisis included low blood sugar, Rhabdomyolysis, leaking of liver enzymes, cardio myopathy (in some cases), and prolonged QTC on heart tests.
5.     The doctors recommended that during a crisis give your doctor our emergency letter, get a glucose test with a finger stick on arrival, ask for dextrose containing intravenous fluids (10% dextrose), ask for a heart monitor, ask for these labs- liver function test, electrolytes, CK level, lactate, ammonia, and ask for metabolic testing- acylcarnitine profile, urine organic acids, total and free carnitine level, and plasma amino acids. 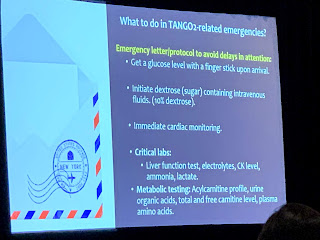 6.     Some MRIs showed brain deterioration.  A crisis or even just the long-term nature of the disease causes thinning of the corpus collosum and additional fluid (loss of brain mass).
7.     Many parents reported that they saw an increase in episodes during puberty.  Perhaps this is due to the extra energy being used to grow and develop into adulthood?
8.     In Dr. Miyake’s study it seemed that CoQ10 and levocarnitine did not prevent a crisis.  Patients who were given only these two supplements still had a crisis afterward.  However, patients who took vitamin supplements, even those found in milk formulas, feeding tube formulas, or in multivitamins did not have another crisis.  These all had vitamins in them.  Although she cannot prove yet without more data that this works, it seems important to get our children on vitamins to possibly keep them out of crisis.  A few parents (including us) reported that B complex and B2 made a positive difference in their child’s health.
9.     In France, when patients were given levocarnitine during crisis, they got worse.  It was said that levocarnitine is an enzyme that helps break down fat.  In crisis, ketones are very high, meaning the body isn’t having issues breaking down fat, it's actually overdoing it.  The problem is converting the fat to sugar and ATP.  So, no carnitine during crisis but probably okay during steady state.
10.  There was a report that some T2 patients tended to have an elevated cholesterol.  This is something that we can keep an eye on as parents.
11.  Dr. Solare recommended that we work with a dietician to make sure that our children have a balanced diet.  They should never fast.  Constant nutrition is a must.  Doctors and families agreed that a ketogenic diet was very unsafe for Tango2 kids and they deteriorated rapidly when trying this diet.
12.  T2 kids reported better health with regular bowl movements and many kids have trouble with constipation (about 55% according to the study so far).  Many are on some type of medication such as Miralax to help them eliminate regularly.
13.  Parents reported that the most difficult parts of parenting T2 kids are the fear of crisis and life threatening symptoms, the cognitive impact on their children (They wish that they could communicate better with their child and their child could communicate with them, sharing what hurts, etc.), the school experience, keeping up with the feeding requirements, and the impact the disease has on healthy siblings.  They reported that the kids were generally very happy and loved to be social with others.  The older kids did get frustrated and angry about their symptoms at times.
14.  Dr. Distelmaier, from Germany, has done research on Tango2 cells to try to understand what the function of Tango2 is in a healthy cell.  This is important work because if we know what Tango2 does in a healthy body we can understand how we might help children who do not have a functioning T2 protein.  It appears that in T2 kids the Golgi body inside the cell is reduced in size and there was evidence of stress in the endoplasmic reticulum in the cells.   His study used human cells and showed that the tango 2 protein seemed to overlap with the Golgi bodies and endoplasmic reticulum in the cell.  They think this is the area where T2 does an important job. 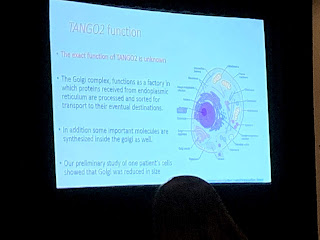 15.  Dr. De Lonlay, from France, reported that they have 19 cases of Tango2 in France.  Are they faster to use genome sequencing for diagnosis than we are in the US? Perhaps there are a lot more cases of T2 than currently diagnosed?
16.  Dr. Lalani shared about the genetics of T2.  Both parents have to have damage to their T2 gene for Tango2 disease to occur in the child.  With each pregnancy, there is a 25% chance that the child will have Tango2.
17.  Dr. Miyake shared her research on heart issues with T2 kids.  The heart is healthy in T2 kids until they are in crisis.  After crisis, the heart returns to normal and the QT issues go away.  Arrythmias are the life-threatening issue that occurs during crisis.  The heart rate is also very fast during crisis.  Some of the treatments that she used to treat heart issues will be counter intuitive to doctors because they will not understand that the heart returns to normal after crisis.  ECMO can be used as a last resort to save T2 kids.  Doctors may not support this option because they will not understand that the heart will recover to its former state.  (ECMO is only used in cases where the heart is likely to recover and is not permanently damaged).  She gave us a list of dos and don’ts that we will update on our website.  Her experience with multiple T2 patients helps us understand what will work and what won't with T2 kids. 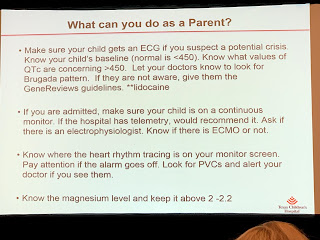 18.  Dr. Barrage, from the US, has been working with the T2 mouse model.  She recently was awarded a 100-thousand-dollar research grant to study her T2 mice!  She was able to create the knockout model of the mice.  Dr. Distelmaier’s team shared the antibodies they used to make it work which saved the team a lot of time.  (We are so thankful for their collaboration!). She is working on stressing the mice to create a crisis but since they are mice and not humans, they did not respond to stress from fasting.  She is attempting to stress the mice with cold because this worked to create a metabolic crisis in mice with genetic issues similar to Tango2. 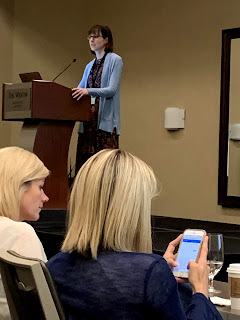 19.  Dr. Miyake agreed to update our emergency letter with information about anesthesia with our Tango2 kids.  She recommended that you wake your child up the night before surgery at 11pm and eat.  Also consider IVF.  After surgery work toward feeds quickly.
20.  There is a lot of research that needs to be done so that we can make more conclusive statements about the care of our T2 kids.  Our participation in the natural history study is vital.  Dr. Miyake really appreciated notebooks that contained information about their child’s health.  (This is something we plan on starting because it is difficult to remember everything!)